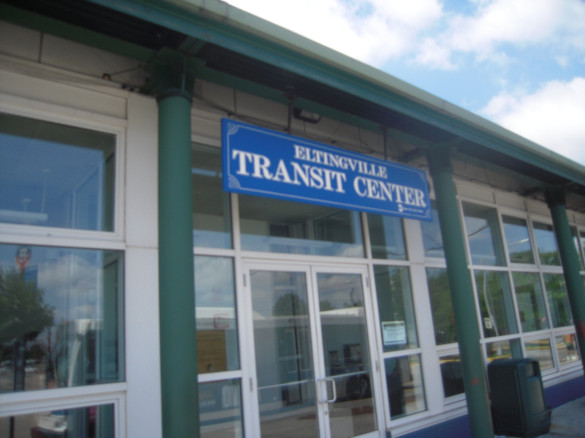 THE COMMUTE: Last week, we discussed the Rockaway Ferry to lower Manhattan, which now also stops at the Brooklyn Army Terminal due to the closure of the Montague Street Tunnel. This week, we discuss the possibility of the Brooklyn Army Terminal becoming a major transit hub. It could be the terminus for the Triboro RX rapid transit line proposed by the Regional Plan Association more than 40 years ago, which has recently been resuscitated and hailed by Channel 2 News as a “new” proposal. We have mentioned this plan several times before and how it needs to be included in the MTA’s long range plans.

“What is a transit center,” you ask. It’s similar to an off-street bus terminal except, instead of bus routes terminating there, for most local routes it is an intermediate stop. One was built in 2004 in Eltingville, Staten Island to eliminate dangerous pedestrian crossings for those transferring between bus routes by consolidating all the bus stops at a single off-street location. Its other purpose is to encourage drivers to park their cars there and use mass transit for the remainder of their trip. 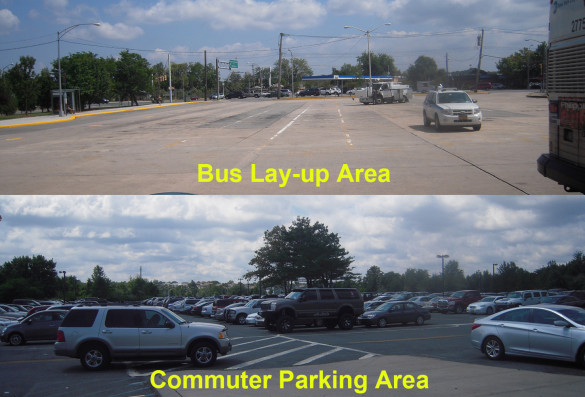 The Eltingville Transit Center in Staten Island has other amenities, such as a bus storage area; a large, indoor, weather-protected waiting room with MetroCard machines, and a large free parking lot for commuters boarding local and express buses. It did have bathrooms when constructed, but those are now limited to use by employees, after being vandalized several times. The transit center, located at Arthur Kill Road and Richmond Avenue, serves six local bus routes, an SBS route, and eight express bus routes, six of which terminate there.

Many other areas in New York City could benefit from a transit center. However, in most cases, the land needed is not available. A transit center could have been built at the Junction by Flatbush Avenue and Nostrand Avenue, south of Avenue H, at the former location of the municipal parking lot, to serve the B6, B11, B41, B44, B103, Q35, BM2 and 2 and 5 trains, but the city in its infinite wisdom decided to erect a new shopping center there instead. I previously wrote about the need for off-street bus terminals and how the city is choosing additional development, and subsequently creating new congestion over reducing congestion by taking buses off the street.

Why A Transit Center Near The Brooklyn Army Terminal?

First of all, land is available. There is space for plenty of free parking, which would encourage many to leave their cars there and board mass transit. This could be in the form of the Triboro RX route I referred to earlier — local, limited and express bus routes and a ferry to lower and midtown Manhattan.

I have previously advocated for increased park and ride facilities and kiss and ride areas to encourage mass transit. The so-called park and ride facility on Voorhies Avenue in Sheepshead Bay is a joke, with only 25 spaces that are occupied by 7:00 a.m. in the morning. (Most of the parking spaces in the lot are for short-term parking.) More commuters would use mass transit if they could easily find a parking space at a transit facility or securely leave their bikes there.

What Bus Routes Could Be Served At The Army Terminal?

Today, there is only one, the B11, which terminates near the Brooklyn Army Terminal. However, when the B37, Third Avenue route returns next year, it could easily be rerouted to serve the Army Terminal and ferry. Express routes from Brooklyn and Staten Island also could stop there. Who says that express routes must only serve Manhattan? Why should you not be able to board an express bus to travel between Brooklyn and Staten Island?

Additionally, a new limited stop bus route along 65th Street, stopping only at even-numbered avenues (which I proposed last year), could be extended to serve Bay Ridge and the Army Terminal. It could also serve as a terminus for new express bus, mini-bus, or van routes to LaGuardia and Kennedy airports, as well as to other commercial hubs such as Flushing, and intercity routes to locales such as Washington DC and Philadelphia.

Could New Bus Or Van Service Be Self-Sustaining?

A legitimate question. There may not be enough demand to justify regular continuous bus service to far way areas using conventional buses. However, look at the success of the new start-up, long distance, low-cost bus services, which proves there is demand for affordable bus service. Look at the economic gain to the city by providing new access to employment centers, such as major airports. Look at the benefits if there is a more convenient way of getting between Brooklyn and the Bronx without going through Manhattan, if the Triboro RX Plan became reality one day.

The MTA’s own long range planning document, Looking Ahead, recognizes the need for improved travel between and within the boroughs in the coming decades, as more jobs move away from Manhattan. Yet, they barely mention the possibility of using underutilized or abandoned rights of way, such as the old Rockaway connector. They also ignore the need to revamp bus routes, so that it will not continue to take two and a half hours to travel between the northern and southern portions of Queens. Most local bus routes there were set up to take passengers to the subway, not to provide intraborough travel, which may require four or five transfers and multiple fares. Select Bus Service will help but not much when you only consider existing routes, and ignore the possibility of combining or rerouting bus routes to better serve riders. The MTA has no plans to comprehensively study travel needs.

This is why we cannot wait for the MTA to act, because without huge financial subsidies — and none are likely to be forthcoming — they will not act. We must look toward the private sector. We have an unregulated dollar van industry, which has been very successful in running private mass transit and providing needed services and employment. Unfortunately, much of that service is not legal subscription service, but illegal hails off the street, competing with MTA local bus service in some cases.

Why could these services not be allowed to follow specifically set up routes between, for example, Sheepshead Bay and Gateway Shopping Mall, utilizing the Belt Parkway? This trip would take 20 minutes by van as opposed to the 90 minutes or more by current MTA routes. The city has recently started the green cabs to provide taxi service in the outer boroughs, but these cabs are still too expensive for most people traveling individually and long distances.

A cab ride from Brooklyn to the Bronx is prohibitively expensive, and since the Triboro RX Plan is not in our immediate future — if it even gets off the ground at all — utilizing a legal, private system of group riding may be the answer. This would provide quick and affordable service to areas where demand does not exist, to justify use of conventional bus service. The green cab program was initiated to provide an influx of revenue to the city through the sale of medallions. Aiding local travel was merely a byproduct.

Next Week: Part 2 – More About How Private Industry Can Help.

The Commute is a weekly feature highlighting news and information about the city’s mass transit system and transportation infrastructure. It is written by Allan Rosen, a Manhattan Beach resident and former Director of MTA / NYC Transit Bus Planning (1981).

Disclaimer: The above is an opinion column and may not represent the thoughts or position of Sheepshead Bites. Based upon their expertise in their respective fields, our columnists are responsible for fact-checking their own work, and their submissions are edited only for length, grammar and clarity. If you would like to submit an opinion piece or become a regularly featured contributor, please e-mail nberke [at]sheepsheadbites [dot]com.