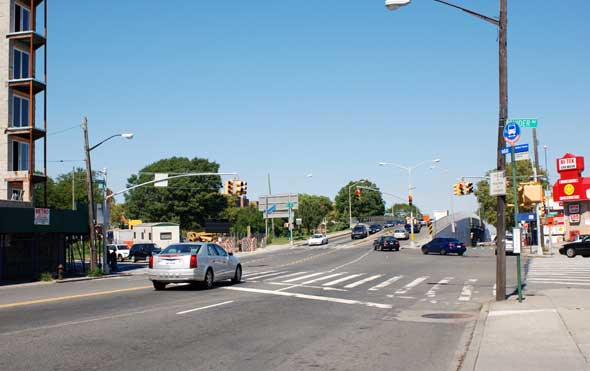 The plan is a slew of confusing, complicated changes (click to enlarge)

Congressman Anthony Weiner joined the fray in our latest David v. Goliath battle, criticizing the Department of Transportation for moving forward with a plan detested by the community.

The congressman fired off a letter to DOT Commissioner Janette Sadik-Khan asking the agency to reconsider implementing traffic changes at Coney Island Avenue near Guider Avenue and Neptune Avenue. The changes are part of the Coney Island/Gravesend Sustainable Development Transportation Study, a proposal seven years in the making that aims to clear up roadway confusion and improve safety at major intersections between Sheepshead Bay, Coney Island, and Bensonhurst.

“In my years representing southern Brooklyn first as a Councilman and now as a Congressman, I have come to know this highly trafficked area,” Weiner wrote. “While much can be done to improve the flow of traffic in our community, I share my constituents’ concerns that some of the study’s proposals may hurt rather than help the current situation.”

Weiner’s harshest criticism is reserved for a portion of the plan recommending an extension to the B74 bus line. The new leg of service would run down Neptune Avenue before turning to Manhattan Beach, connecting Kingsborough Community College with Coney Island.

“At a time when the MTA is making service cuts left and right, I do not understand why additional service will be provided to a community that has neither requested nor expressed a need for it,” Weiner wrote.

As we wrote in December, the Coney Island/Gravesend Sustainable Development Transportation Study recommends eliminating left turns onto Guider Avenue from the southbound stretch of Coney Island Avenue, which would reroute drivers looking to head east on the Belt Parkway down the heavily congested Neptune Avenue – where they’ll then have to compete with the new B74 service. It will also eliminate parking on the north-bound side of Coney Island Avenue so they can divide the strip into three lanes – a right-turn, left-turn and no-turn lane.

Community Board 15 and local civic groups blasted the plan as an overly-complicated solution that would cause more congestion on Coney Island Avenue and all the way down Neptune Avenue. They also said it would restrict access for a local firehouse, car wash and gas station as well as endanger students near Bay Academy. Lastly, the suggestion to eliminate parking would hurt businesses, opponents said.

Most in the area agree that simpler solution could be offered to reduce accidents at Coney Island Avenue and Guider Avenue: just install left-turn signals.

Here’s is Weiner’s full letter to the DOT: Rep. Weiner letter to NYC DOT regarding traffic proposal in Sheepshead Bay

Previous ArticleVideo: Livery Cab Chaos On Sheepshead Bay Road
Next Article Fidler: Bike Lanes Should Not “Drop Out Of The Sky”