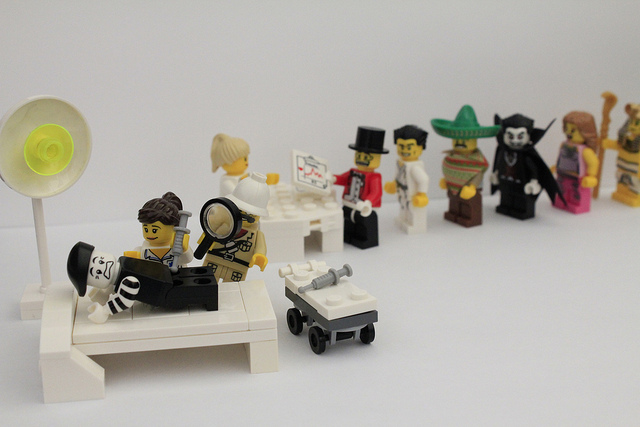 What a perfect photo for this article. (Source: Pedro Vezini/Flickr)

A recent report is raising questions about several local doctors who rank among the nation’s highest earners for Medicare claims, with many of them seeing the same patients thousands of times in just a few short months.

While referring patients to other doctors is common, a high frequency could indicated what experts call “churning” – cross-referring within a known network for financial gain and not medical need, and possibly for a kickback. The local network is also unusual because chiropractors, physical therapists and occupational therapists usually compete with one another, and would be unlikely to send referrals.

The USA TODAY analysis found that six practitioners in Brooklyn all regularly saw the same patients, often treating each person dozens of times. Medicare paid the six a total of nearly $15 million in 2012, the only calendar year that payment data is publicly available. Additional practitioners also fed into and benefited from the referral network, but at smaller rates than the top half-dozen.

For example, physical therapist Wael Bakry and occupational therapist Victor Genkin, both part of the network, are the first and second biggest recipients of Medicare money in 2012 in their respective fields.

Medicare paid Bakry about $4.1 million for performing more than 184,000 procedures on 1,959 patients. Genkin brought in more than $2.3 million from seeing fewer than 1,200 patients.

According to Medicare’s data, over 18 months the two shared more than 700 clients, who saw both regularly — as many as 25 times each.

The top earning chiropractor in the nation, Brooklyn’s Alexander Khavash, was also a top referrer to Bakry and Genkin. According to the Medicare data, Bakry and Khavash shared more than 1,200 patients between them.

Often, but not always, the physical therapist and chiropractor saw patients back-to-back. One group of patients made a total of more than 17,000 visits to both doctors on the same day — an average of 13 times per patient — over an 18 month span.

The patients also regularly cycled through internist Abraham Demoz, who has used the same address as Genkin and Bakry. For example, Khavash saw 2,060 patients in 2012, according to the Medicare payment records. Demoz shared almost 1,800 of them with him over 18 months, the data show. Demoz and Genkin had about the same amount of patient overlap.

Mayura Kanekar is another Brooklyn provider who is part of the same circle.

Kanekar brought in nearly $3 million as the top Medicare-earning occupational therapist in the country in 2012. Occupational therapists work on people’s fine motor skills so they can perform daily tasks. Over the 18 months covered by Medicare’s referral data, a group of about 800 patients routinely visited both her and Khavash on the same day — seeing the two specialists back-to-back a total of 11,621 times.

None of the federal law enforcement officials USA TODAY interviewed would comment about whether any of the individuals are under investigation.

Some of those docs have also come up in other recent reports for their unusually high billing.

The USA Today report is lengthy and detailed – and a worthwhile read. Their reporters go to find the doctors at their listed medical offices, only to find abandoned storefronts or residential buildings. The look into the causes for the high rate of Medicare claims, and also address investigators’ challenges in finding and prosecuting such cases. Check it out, then feel sad.