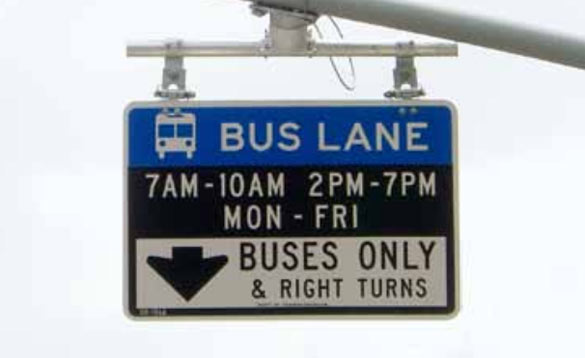 The B44 Select Bus Service route on Nostrand Avenue became the latest in the city to feature camera-enforced bus lanes, but a snag in mailing out violations and the functioning of the cameras themselves has caused drivers unaware of the new restrictions to receive dozens of violations months after the incident.

The Department of Finance and Department of Transportation conceded that the agencies had failed to send out the tickets in a timely manner, catching drivers unaware and allowing them to repeat the mistake.

Councilman Chaim Deutsch won the concessions from the agencies, who are now agreeing to suspend mailing and to review all violation that occurred on the route between March 17 and July 25. Motorists will still be fined, but only for the first violation they received, and refunds will be issued to those who have already paid.

“When people get a violation, it’s to educate them that they did something unlawful and they have to stop,” Deutsch told Sheepshead Bites. “Having it come to them three or four months later doesn’t serve that purpose. Given that it’s the newest SBS bus lane, a lot of people still don’t understand how it should be used even though there are signs posted.”

Deutsch said the cameras were also taking multiple photos of the same vehicles, causing additional violations for the same incident. He said the DOT has corrected that problem.

During active hours, a vehicle may only enter the bus lane to make a right turn, drop off passengers, or make or receive a delivery. More about bus lanes can be found in this DOT handout.

The violation carries a $125 fine, but with motorists unaware of the changes and not receiving the summonses promptly, they were fined multiple times. Deutsch said one constituent received approximately $7,000 in fines. He added that about two dozen constituents have already reported this problem to him, “but there’s a lot more.”

Camera enforcement on the route will remain in effect, but the agencies said they will go through their records and contact those who received multiple violations. If you think you’re one of them, you can speed up the process of having the summonses tossed or receiving a refund by calling Deutsch’s district office at (718) 368-9176.