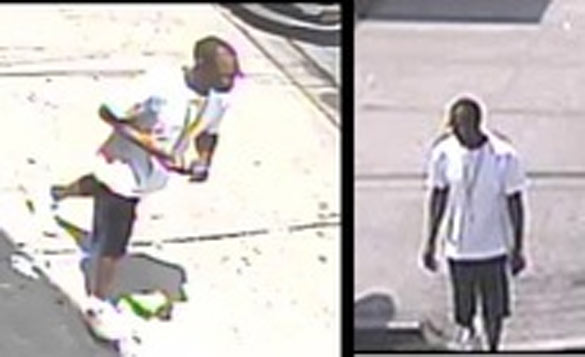 Cops are on the hunt for a Coney Island chain snatcher that attacked and robbed a 54-year-old woman, leaving her with lacerations to her head.

The thug was caught on NYPD-operated surveillance cameras at approximately 1:00 p.m. as he walked up Mermaid Avenue on Friday, July 18. After crossing West 31st Street, the suspect passed a bus stop where the victim was waiting in line. He walked further up the street and circled back. As he came beside her, he ripped off her necklace and caused her to fall forward as he ran off. The woman fell on her face, and had to be taken to Coney Island Hospital to be treated for cuts to her head.

The thief is described as a black male in his 30s, 5-foot-7-inches, last scene wearing a white shirt, dark short and white sneakers.

Anyone with information is asked to call Crime Stoppers at (800) 577-TIPS (8477). The public can also submit their tips by logging onto the Crime Stoppers website, or by texting their tips to 274637 (CRIMES) then enter TIP577.